A Look At Visual Artists During The Harlem Renaissance 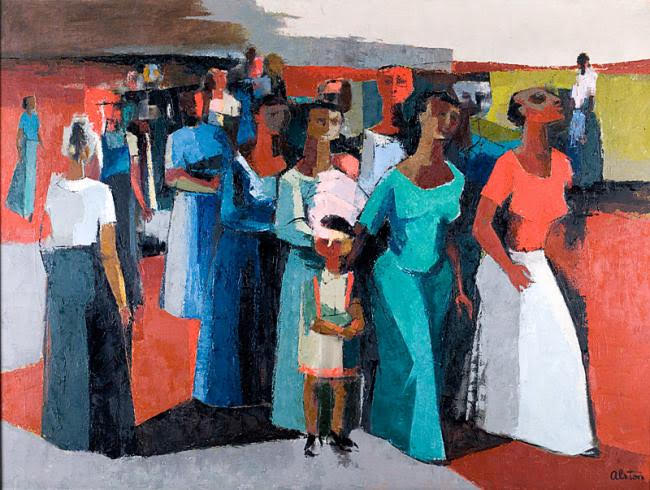 In remembering The Harlem Renaissance, you likely envision the sweet jazz of Duke Ellington or imagistic poetry of Langston Hughes. Artists of this time brought a new perspective to the forefront of our collective consciousness and projected light on what it means to be Black in America. The artists longed to depict themselves and their experiences through their mediums to reclaim their narrative. Though talked about less than the music or poetry, visual art was a huge part of The Harlem Renaissance. Here are some of the talented artists who were integral to the visual arts movement.

As a poet, a painter, and a sculptor, Warrick studied in Paris and was a student of Auguste Rodin before moving back to America. Her art was so groundbreaking because it was honest, raw, and at times brutal. Her sculpture “Ethiopia Awakening” was a precursor to the Harlem Renaissance, and led the way for artists after her. She never feared vulnerability or intimacy as an artist, always reaching for the truth in her work. She is known for showcasing the pride of the people.

Augusta Savage was another sculptor who made a huge impact during the Harlem Renaissance. She also taught art to young students, mentoring the next generation. Her piece Gamin, a sculpture of a young boy, was among her most notable. Some people say the boy was her nephew and some that it was a homeless boy. She was also commissioned to create sculptures of W.E.B Dubois and Marcus Garvey, two giants of the Harlem Renaissance who she immortalized through her work. She also made small clay busts of ordinary people to celebrate the everyday joys and sorrows. During the Great Depression, she gathered Black artists for the Federal Art Project, a part of the Works Progress Administration.

Charles Aston did it all. Although he originally trained as an architect, he became a teacher, painter, sculptor, and muralist as his talents progressed. The boys’ camp he started, Utopia House, helped him educate and mentor other young artists. He is also known for heavily influencing Harlem Hospital Murals and was the first Black director of the Federal Art Project. His murals were beautiful, engaging, and emotional. His two murals currently shown in Harlem Hospital show a juxtaposition between traditional and modern healing practices.

As a photographer, James VanDerZee was able to capture a realistic view of life on the streets of New York. He began playing with a camera at age 14 and soon got a job in a New York City dark room. He aimed to show the beauty of the world and was able to do that by capturing wedding photos, street scenes, and intimate images of people doing what they loved. He was an expert in the field of portraiture, able to masterfully highlight the essence of his subjects while composing brilliant works of art. VanDerZee is also known for documenting the Harlem Renaissance and the other artists, writers, and musicians. His aim, uniquely, was to inspire optimism and joy. He wasn’t very well-known until a museum curator in the 1960s called to ask him if he had any photographs from the Harlem Renaissance. When he obliged, his work became greatly admired.

This painter and graphic artist was integral to the Harlem Renaissance. Sometimes known as “The Father of American Art,” Douglas began his career by illustrating a book called The New Negro. His famous mural “Aspects of Negro Life” showed the various situations that were an inherent part of African American life. He left traditional landscape painting behind and moved into the Art Deco realm. His stylized pieces experimented with lighting and left the view to understand the racial pride within the piece. After the Harlem Renaissance, he studied in France and continued with a strong career in making Black voices heard.