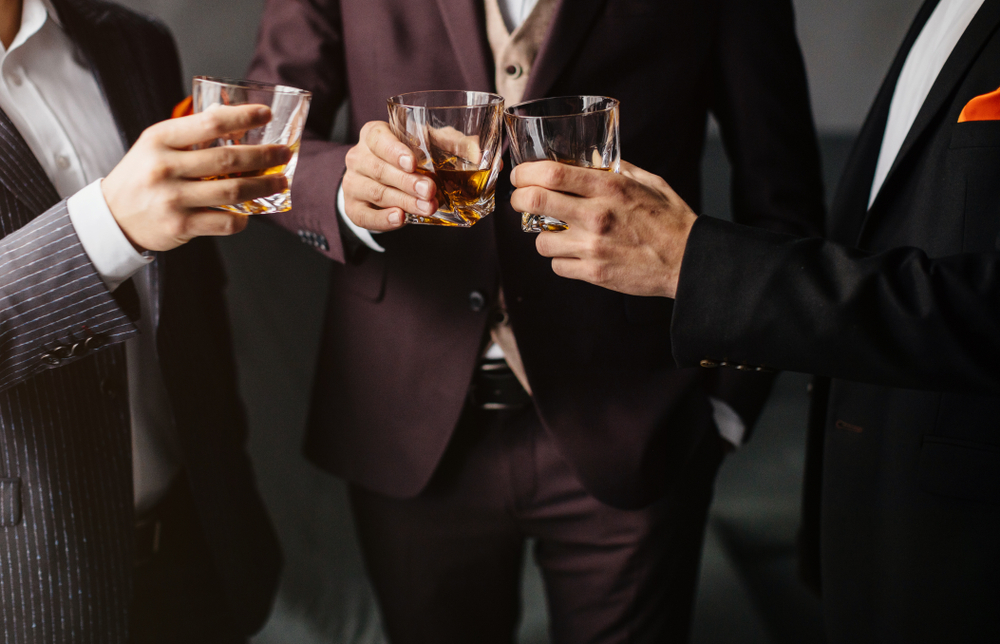 In the words of George Bernard Shaw, “whisky is liquid sunshine.” But for many people with gluten intolerance, the sun has not been shining. Because whiskey is distilled from gluten-containing grains, those who react to gluten have always wondered if they were safe to drink it. After all, the grains (such as wheat, barley, and rye) give whiskey its deep malted flavor. Nevertheless, recently the Food and Drug Administration (FDA) has ruled that the distilling process renders whiskies gluten-free, which is excellent news for good whiskey fans and those who struggle with gluten intolerance.

Distillation Process Leaves the Gluten Behind

Distillation occurs when the fermented alcohol is removed and forms a concentrated liquid, leaving no solids behind. Since alcohol boils at a lower temperature, it will vaporize and then be separated into other containers, which use cold water to turn it back into a liquid.

In most distilleries, the first distillation lasts about 6 hours and creates low wines, which are no more than 30 percent alcohol. The second distillation extracts even more water and creates alcohol that is about 70% by volume. Because of the vaporizing, the gluten is not part of the aged whiskey.

According to the FDA, “[D]istillation is a process capable of separating gluten and other proteins from the remaining compounds…distillation must remove all protein (and thus gluten), regardless if the product has been distilled from gluten-containing grains.” The FDA says that since gluten cannot vaporize, it gets left behind when the alcohol is distilled.

The FDA adds, “For this reason, a distilled product labeling may bear a “gluten-free” claim and should be safe for people with celiac disease.”

Why Did it Take So Long?

For years health officials have felt that whiskey was gluten-free because the distilling process did not allow for the gluten to be vaporized, but it took a while for the official word to trickle down. Officials claimed that whiskey needed to be gluten-free from start to finish to be regarded as gluten-free, and whiskey begins its life with malted grains.

Both whiskey distilleries and those who have celiac disease and other gluten intolerances are happy that the FDA has finally made it official. Chris Swonger, president and CEO of the Distilled Spirits Council of the United States, said, “Allowing distillers to include a “gluten-free” statement on products made from gluten-containing grains will provide additional clarity for consumers to make informed choices about which products meet their dietary needs.”

The FDA’s pronouncement takes the guesswork out of drinking whiskey for those who have been diagnosed with celiac and those who have intolerant reactions to gluten. Although people assumed that whiskey was gluten-free, the official word also means that distilleries can ramp up their marketing efforts and reach new customers that might have a gluten intolerance.

As with most things, there is good news and bad news for the distilleries. The good news is that they are likely to gain more customers and freely market their whiskeys as gluten-free. However, each distillery faces a choice with the news of the official gluten-free determination. Labeling their products as gluten-free would help consumers be very clear about what they are getting, but it also would be very costly to switch all the packaging. It might be a case of distillers finding a more organic time to make the switch and then adding some gluten-free marketing down the road.

As for now, this is basically a win-win for consumers who have battled gluten intolerance as well as the distilleries who work so hard to maintain a gluten-free product.  Koval Distillery co-founder and president Sonat Birnecker Hart said, “I do think that this ruling will make some people who have steered clear of whiskey in the past more comfortable.”

The sun has come out for those who had been afraid of whiskey because of gluten intolerance. Moreover, the same holds for distributors that can now market to a broader audience. George Bernard Shaw was correct when he advocated that whiskey is liquid sunshine, and the world has gotten a little brighter now that the FDA has stepped in with this ruling.