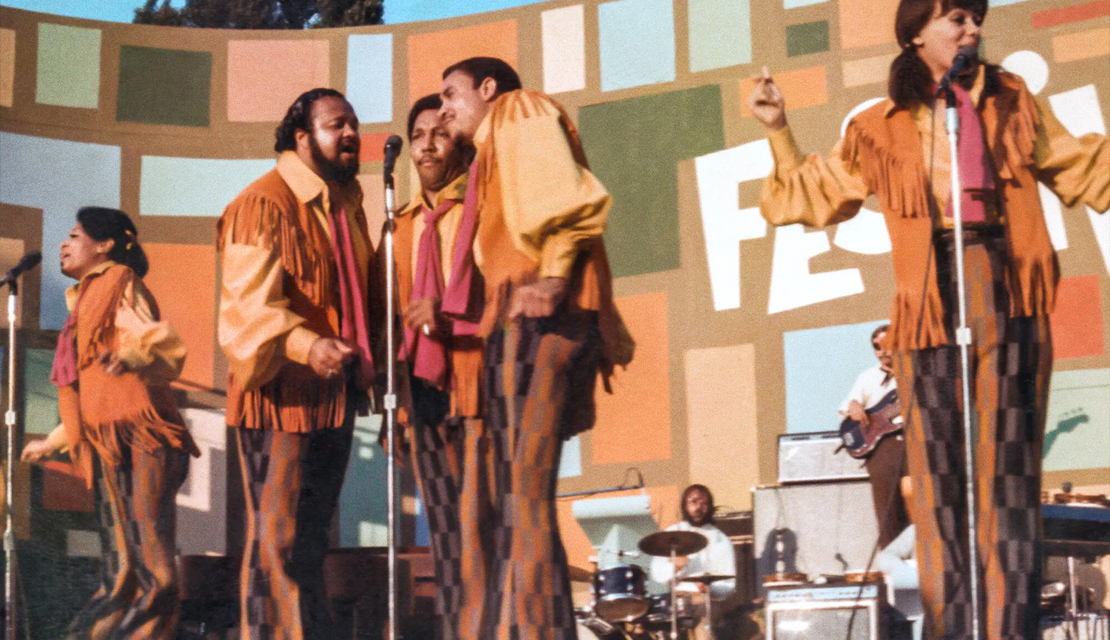 If you love the neighborhood of Harlem, a good documentary, and music that has a little heart, then we’ve got a movie for you!

Summer of Soul (…Or, When the Revolution Could Not Be Televised) is a documentary movie that highlights the Harlem Cultural Festival, and is a vital part of musical history, especially for black entertainers and audience members.

For six consecutive Sundays in 1969, the Harlem Cultural Festival took place in what is now Marcus Garvey Park. The festival was created by promoter/singer Tony Lawrence, who spent much of the festival running the show on the stage. The festival featured such names as Gladys Knight and the Pips, Stevie Wonder, Mavis Staples, Nina Simone, and Mahalia Jackson. But unlike its “counterpart” Woodstock, very few people have ever heard of Harlem’s music festival.

Ahmir “Questlove” Thompson set out to change that, after he found out about 40 hours of footage of the festival that had been sitting in a basement for 50 years. Producer Robert Fyvolent originally became aware of the footage and got the rights to it, bringing Thompson into the equation as director.

Thompson knew this was a story he had to tell, and the rest, as they say, is (musical) history. He marvels that this story almost didn’t get told at all, and wishes it did not take half a century to bring it to light. “What would have happened if this was allowed a seat at the table? How much of a difference would that have made in my life? That was the moment that extinguished any doubt I had that I could do this,” he said. Viewers and critics agree, Thompson’s storytelling is seamless, and his eye for details adds so much to the story, bringing the past glaringly and beautifully into the present.

The documentary was released earlier this year, and the Sundance Film Festival was the perfect venue for Summer of Soul’s release, premiering on January 28, 2021, where it received the Grand Jury Prize and Audience Award in the US Documentary Competition. After being acquired by Searchlight Pictures and Hulu, El Capital Theatre in Los Angeles and AMC Magic Johnson Harlem 9 multiplex in New York City released the film on June 25, 2021. A week later, the film expanded to the rest of the nation as well as the Hulu audience.

Everyone should watch this film, regardless of your musical taste, race, or age. The film is a breathtaking mixture of live performances from the 1969 Harlem Cultural Festival and personal interviews, and Thompson is a master of weaving these elements together. For black music fans especially, this is a must for the musical documentary canon. Highlights include what is purported to be Martin Luther King Jr.’s favorite gospel song, “Take My Hand, Precious Lord,”  sung by Jackson and Staples, as well as a young Wonder singing the entertaining “Shoo-Be-Doo-Be-Doo-Da-Day.” Thompson artfully combines the long-lost live performances with testimonials of the stars that were involved with the festival at the time. Even more mesmerizing, Thompson weaves fan interviews into the mix, and the truth-telling from those who were adolescents at the time is both delightful and insightful to watch.

One of the most important elements of the film is that it legitimizes being a black music fan and gives both fans and musicians alike a piece of the musical history story all their own. With artists such as Staples, Wonder, and Knight, it is no wonder that audiences have been awed since its release earlier this year at the Sundance Festival.

The Guardian gave Summer of Soul five stars, stating that there was “a moment so striking and rich with power at the center of Ahmir ‘Questlove’ Thompson’s Summer of Soul (…Or, When The Revolution Could Not Be Televised) that, while watching it, I actually forgot to breathe.”

Additionally, renowned film critics Rotten Tomatoes rates Summer of Soul  9.1/10, and describes, “Deftly interweaving incredible live footage with a series of revealing interviews, Summer of Soul captures the spirit and context of a watershed moment while tying it firmly to the present.”

If you love the neighborhood of Harlem like we do, do yourself a favor and watch Summer of Soul. With its never-before-seen footage, musician interviews, and the rare and insightful glimpse into the world of the fans, this movie is imperative for all documentary and music lovers. And when it comes to this long-lost musical walk through history, you would be wise to pair this movie with the complex taste of Harlem Standard Whiskey 7-year 101-Proof. Aged for seven years, this symmetrical whiskey with hints of vanilla and cream will pair perfectly with the musical talents of these big names at the Harlem Music Festival. The harmony of flavors, including cocoa, nut, and charred wood, as well as the musical history, will stay with you long after the songs on the screen have ended.