How To Cook With Whiskey 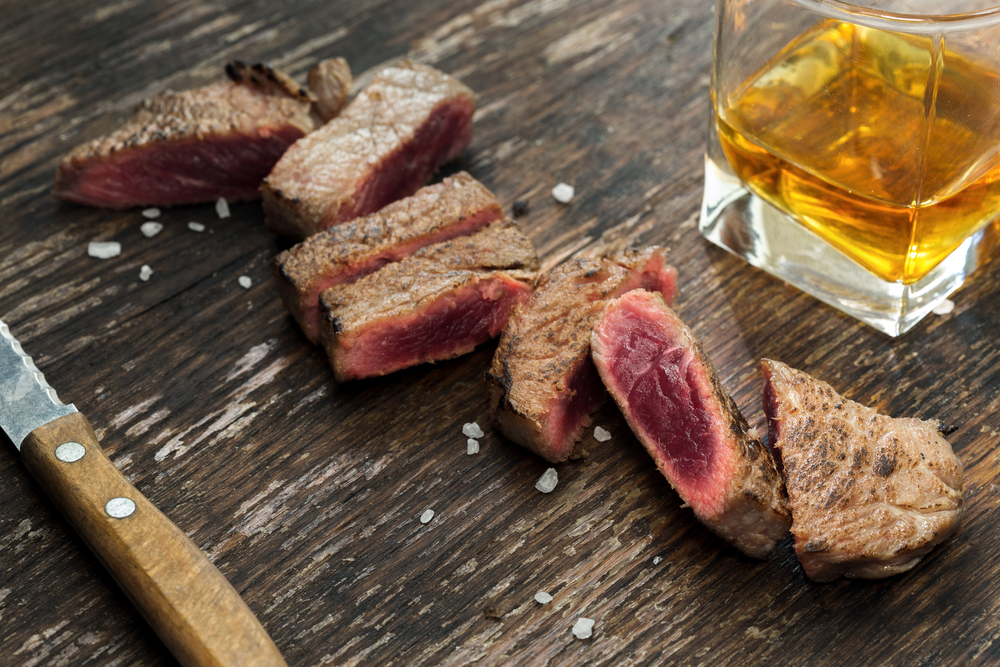 Humphrey Bogart said, “The problem with the world is that everyone is a few drinks behind.” Bogart is a sagacious man, and if you find yourself a few drinks behind, there is an excellent remedy for that. Get some of your drinking done via food! We know that cooking with wine is accepted. But what about whiskey?

Whiskey is an excellent ingredient to add to your favorite recipes (aside from rum balls) and works well with sweet and savory dishes. Don’t worry – it won’t get you drunk, but it will offer a depth of flavor that will leave your guests wondering what your secret ingredient is.

Whether you require hair of the dog or not, there are several clever ways to up your whiskey intake at breakfast. Move over Wheaties, bourbon pancakes, and bacon is the real breakfast of champions!

If you want to get your morning started outright, then Harlem Standard Bourbon in your breakfast is the pancake topping of choice. Add maple syrup, a touch of vanilla, and bourbon to taste in a small saucepan to cook off the alcohol. Have a lid handy in case the alcohol lights up. The Harlem Standard Bourbon Whiskey is the perfect one for this task with its hint of vanilla, maple, and brown sugar, and will be an even better match for bourbon bacon!

Preheat the oven and lay 8-10 strips of bacon on a cookie sheet. Using equal parts bourbon and brown sugar, brush the bourbon on the bacon with a pastry brush, and then sprinkle the brown sugar on top. This candied bacon will be gone in minutes.

The whiskey festivities can continue at lunch, and there are several ways to play this/pour this. Whether you typically enjoy a salad or a sandwich, or even an elegant fondue, there is a whiskey lunch with your name on it!

The bacon can carry over to a bourbon BLT. The odds are there won’t be any bourbon brown sugar bacon left, but if there is, you can create a tasty BLT with it. The mayonnaise will be a delicious complement to the bourbon covered bacon.

Everyone has a go-to vinaigrette recipe, but I bet you would eat more salad if you added a tablespoon or two of bourbon to the mix. This plays well with the dressing’s acidity, and the American Straight Whiskey 90 Proof with its hint of citrus will be perfect.

Who could ask for anything more? The combination of whiskey and cheese is a match made in heaven, and you sure will feel that way when you dip your bread and veggies into the mix.

Many people are used to having whiskey neat with their dinner, but go out on a limb and put the whiskey in your dinner. Or both. You won’t be disappointed.

Glaze on Chops or Steak or Ribs

Add ketchup, honey, and a few spices, and you can glaze anything you desire, from a filet to a perfect pork chop. When you add in a dash (or more) of bourbon, your meat dish just got a little more spectacular! Heat carefully as you deglaze the pan, and have a lid handy if the flame arises.

You have probably at some point in your life topped your steak with sauteed mushrooms and onions. If you want to kick it up a notch, top your meats with sauteed veggies that are sauteed in bourbon. The connection with the woodsiness of the mushrooms especially will drive you wild. Pair these with the oak charred notes of the Harlem Standard Whiskey 7 yr 101 Proof.

Same idea as above, but there is just something about pairing bourbon and blue cheese that will make your mouth water uncontrollably! Even more so when you sink your teeth into a burger with blue cheese in the middle, and a simple glaze of honey, ketchup, soy, and bourbon dripping over it!

If you’d love an easy dessert treat with a depth of flavor, look no further than a little ice cream sundae you can make at home. Thaw 4 cups of vanilla low-fat ice cream, and when it is soft enough to stir, add ¼ cup maple syrup, two tablespoons of Harlem Standard Bourbon 4-Grain, and ¼ teaspoon cinnamon. Stir all ingredients, then re-freeze to your desired consistency.

To the whiskey purist, it might be blasphemy to use whiskey in your foods, but to the rest of us, adding a healthy pour will add a depth of flavor to both savory and sweet foods that are sure to make you smile. Whiskey is the kind of ingredient that demands experimentation.