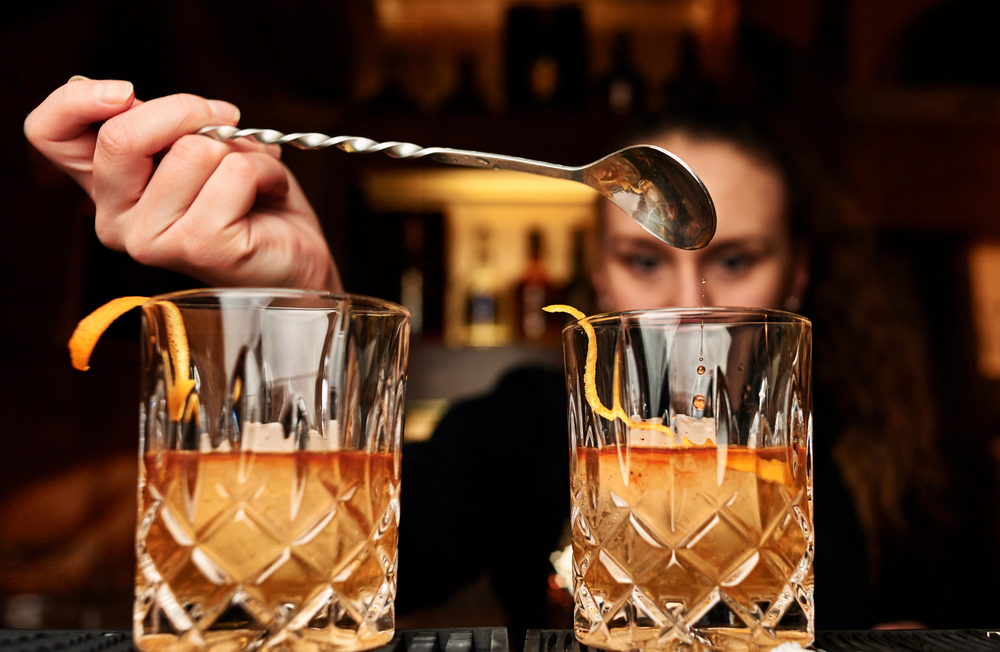 A good fall whiskey cocktail is the perfect remedy to the barrelling autumn winds we are beginning to feel. There truly is no better liquor to warm the body and spirits than whiskey. Gone are the refreshing spritzers, strawberry whiskey lemonades, or light beers of the summer. You need a substantial drink that will meld the flavors of fall with your need to get cozy. There are many whiskey cocktails that will do the trick, and four of our favorites are described below.

Apple-picking is a perfect fall date activity, and what better use for those apples than using them in a post-date cocktail? Believe it or not, you can create your own homemade apple cider by boiling apples. Add cinnamon and cloves to spruce it up. Whether you buy or make your apple cider, start with about two-thirds cup of cider in a tumbler filled with ice. Add whiskey to taste. Two ounces is a good starting point. After the whiskey, you need a splash of bitters, cinnamon sticks, and apple slices for garnish.

Although it seems like tempting fate to alter the delicious traditional whiskey sours, there are a few renditions that we love. This is one of them. With hints of cinnamon and maple, this would be a great drink for a fall brunch or as part of dessert at a clambake. With the unexpected addition of maple syrup to your cocktail shaker, once you add the bourbon of your choice and the lemon juice, you are ready to shake. Garnish with a pinch of ground cinnamon… and if you’re really fancy, a maple candy.

• 2 to 4 teaspoons maple syrup, to taste

• Garnish with a lemon twist

Another use for your homemade apple cider is to use it for Kentucky mulled cider. The word mull means to heat, sweeten, and spice, and that is exactly what Kentucky mulled cider will do to your bourbon, and yourself for that matter! Mix the apple cider, cinnamon, and cloves together in a medium saucepan, and heat until it is warm. Once you pour it over the bourbon, serve the mulled cider warm, with a cinnamon stick to garnish. This is a fantastic drink to sip while sitting in front of the fireplace, or watching a movie on a cold day.

From pumpkin muffins to carving the perfect jack-o-lantern, pumpkins are the quintessential fall gourd. As prolific as pumpkins are around Halloween, you have probably yet to put them in your cocktail. Be the hit of your next party by sharing this one with your guests. It’s a unique cocktail created by Brian Cupitt, the beverage manager of Alma de Cuba in Philadelphia. The charred spiced taste of the rye is a perfect complement to the tart, fruity pumpkin, and the sweet vermouth adds a depth of sweetness and balance to the drink. Once you have made the pumpkin scrub, simply shake all of the ingredients in your cocktail shaker, pour, and enjoy!

The pumpkin scrub involves roasting the calabaza squash and mixing it with apple cider vinegar and sugar. After roasting the pumpkin in a 350-degree oven for about 40 minutes, cool and remove the pumpkin innards. In order to make the scrub combine equal parts of sugar, apple cider vinegar, and pumpkin, refrigerating for at least 24 hours. After straining the liquid, make sure to shake it. The scrub will keep at least six months in an air-tight container.